A Shih Tzu (play /??i?tsu?/ sheet-soo; Mandarin: [???ts?]) is a dog breed of dog weighing 4–7.25 kilograms (8.8–16.0 lb) with long silky hair. The breed originated in China, and is the closest known descendant of the prehistoric Chinese wolf, the “Senji”. Shih Tzu were officially recognized by the American Kennel Club in 1969. The name is both singular and plural. 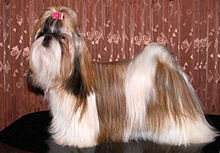 Shih Tzu (simplified Chinese: ???; traditional Chinese: ???; pinyin: Sh?zi G?u; Wade–Giles: Shih-tzu Kou; literally “Lion Dog”), is the Chinese name rendered according to the Wade-Giles system of romanization in use when the breed was first introduced in America; the Chinese pronunciation is approximately shirr-ts?. The name translates as Lion Dog, so named because the dog was bred to resemble “the lion as depicted in traditional oriental art,” such as the Chinese guardian lions. The Shih Tzu is also often known as the “Xi Shi quan” (???), based on the name of Xi Shi, regarded as one of the most beautiful woman of ancient China, and, less often, the Chrysanthemum Dog, a nickname coined in England in the 1930s. The dog may also be called the Tibetan Lion Dog, but whether or not the breed should be referred to as a Tibetan or Chinese breed is a source of argument, the absolute answer to which “may never be known”.

A small dog with a short muzzle and large, dark eyes. With a soft and long double coat, the Shih Tzu stands no more than 26.7 cm (101?2 in.) at the withers and with an ideal weight of 4.5 to 7.3 kg (10 to 16 lbs). Drop ears are covered with long fur, and the heavily furred tail is carried curled over the back. The coat may be of any color, although a blaze of white on the forehead and tail-tip is frequently seen. The Shih Tzu is slightly longer than tall, and dogs ideally should carry themselves “with distinctly arrogant carriage.” A very noticeable feature is the underbite, which is required in the breed standard.

The traditional long, silky coat that reaches the floor requires daily brushing to avoid tangles. Because of their long coat and fast growing hair, regular grooming is necessary which may be a costly expense and should be considered when looking at this breed. Often the coat is clipped short to simplify care, in a “puppy clip”. For conformation showing, the coat must be left in its natural state, although trimming for neatness around the feet and anus is allowed